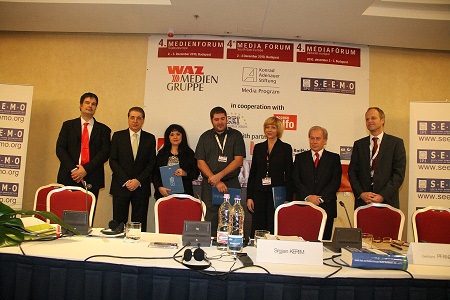 Welcome speeches will be given by Srgjan Kerim, President of the 62nd Session of the United Nations General Assembly and special envoy for political affairs of the WAZ Media Group, Frank Spengler, Deputy Head of the European and International Cooperation Department of the Konrad Adenauer Stiftung (KAS), Gerhard Pfanzelter, Secretary General of Central European Initiative (CEI), and Oliver Vujovic, Secretary General of the South and East Europe Media Organisation (SEEMO).

After the opening, a roundtable between journalists and experts on the hot media topic of WikiLeaks will be held.

More than 250 media professionals are expected to take part. A welcome reception will be organised in cooperation with Raiffeisen Bank International AG (RBI). During the SEE Media Forum the annual CEI SEEMO Award for Outstanding Merits in Investigative Journalism as well as the annual WAZ-IFJ (International Federation of Journalists) Courage Award will be presented and awarded to outstanding investigative journalists.

The WAZ Media Group and the International Federation of Journalists (IFJ) will present the team of Hungarian authors Jozsef Gelei (50) and Laszlo Muranyi (54) with the “WAZ-IFJ Prize for Courage in Journalism 2010”. The sponsors will award Croatian journalist Hrvoje Slabek (38) a second-place distinction. The jury has decided to split the prize, which is being announced for the second time.

The Central European Initiative (CEI) and the South East Europe Media Organisation (SEEMO) will present to Adrian Mogos from Romania the CEI SEEMO Award for Outstanding Merits in Investigative Journalism 2010, along with a ‘special mention’ for Iryna Khalip from Belarus and Lydia Pavlova from Bulgaria for their valuable contribution to investigative journalism in their countries.

In addition to the working sessions, the two-day forum offers a unique opportunity to meet leading professionals for an open discussion about media, investigative journalism and access to information in South East and Central Europe.